The Old Stove Pub, with its bright neon sign outside, has been a Sagaponack mainstay for over 50 years. The legendary restaurant has finally opened its doors in Midtown Manhattan. While the trend has been for New York City restaurants to open an outpost in the Hamptons, Old Stove Pub is set to establish itself as a new hotspot on East 59th Street.

Born and raised in Southampton, owner Joseph DeCristofaro is a restauranter and notable real estate developer. He has created a welcoming atmosphere that offers quality steaks and entrees set to rival the best steakhouses in the city.

The Old Stove Pub ‘s location in Sagaponack originally opened in 1967 as an Irish pub, Flynn’s Inn, and has since been through multiple iterations. The Johnides held the longest reign of ownership thus far, 35 years. They succeeded in turning the place into a Hampton’s establishment with an exclusive Greek menu and A list clientele. Not every restaurant can claim to have had the likes of Billy Joel, Ralph Lauren, John F. Kennedy Jr., and more, singing late-night karaoke and gossiping over a juicy steak.

I was fortunate enough to dine at the restaurant last week. The meal started with an amuse-bouche of crisp toast topped with white beans, perfect to munch on while perusing the menu. After suggestions from the waiter, I started with oysters and the trio of dips, which included babagaonoush, tzatziki, and hummus. The oysters tasted as though they were picked from the ocean in the Hamptons that morning. The pita was warm, and I wouldn’t be surprised if it was baked to order and taken from the oven straight to the table.

My eyes lit up when I saw our server approaching with the seafood pasta, steak, fries, and creamed spinach. It was a feast! I don’t normally go for seafood pasta, given it usually entails a large heaping of spaghetti with only a few pieces of seafood, but the seafood on top of this dish could have been a meal unto itself. It was truly delicious. The steak was cooked to perfection, medium rare, and lived up to its legendary status. Rumor has it that the Old Stove Pub’s steak is what really draws celebrities to the table.

For dessert, I enjoyed the Espresso Martini (the perfect mix of vanilla vodka, Kahlúa, Frangelico and freshly brewed Espresso) paired with the Tartufo. If you have never enjoyed a tartufo, do yourself a favor and go order one at the Old Stove Pub, because wow! The Italian dessert, which originated in Calabria, is an irresistable truffle of gelato and melted chocolate with a gem of a cherry hidden inside.

My visit to the Old Stove Pub was simply delicious. To all those celebrities out there who were already dining here, I get it. And, thankfully, now you don’t need to drive all the way out East to enjoy the food and service yourself. Although there is no neon sign to guide your way to the door, Manhattan’s Old Stove Pub is definitely worth finding. And, who knows, maybe Jimmy Fallon will be there already chowing down on the Boneless Rib Eye when you arrive. 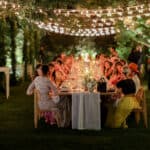 HOW TO HOST IN STYLE THIS SEASON IN THE HAMPTONS

THE 10 COZIEST CAFES TO ENJOY AUTUMN IN THE HAMPTONS